“Half a truth is often a great lie.” -Benjamin Franklin 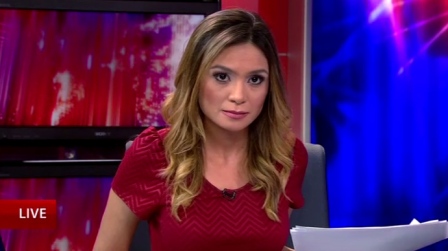 As a seasoned viewer of news, commentary, and media reports, I do the best I can to vet any news and information that I come across.  Having the right information in proper context can often mean the difference of going to war, or finding a more peaceful resolution.  Information in proper context can also mean the difference of making or breaking one’s financial status.  That being said, last week, former RT-News anchor Liz Wahl resigned from her post live on Air Wednesday March 5th, 2014.  This was on the heels of former colleague Abby Martin’s noble stance against Russia’s military aggression.  In the aftermath of this amazing revelation is Liz Wahl may have damaged her credibility as a journalist.

Since leaving RT-News, Wahl has made several media rounds throughout the TV circuit such as The View, Your World w/Neil Cavuto, Anderson Cooper 360 and so on.  I’ve been an RT-News viewer since 2010.  For the most part, RT puts out some pretty solid news reports.  Though I don’t watch all of their programming, there are a few that I thoroughly enjoy.  Wahl’s position was at the anchor desk, so her reports were the most objective and consumable.  Nevertheless, I’m fully aware of the bias RT in fact does maintain when it comes to veering away from negative news stories that concern Russia.  I understand why they do it, but fortunately for me, RT is not the sole place I receive my news and information from.  Anyhow, when it concerns Liz Wahl, she has made several statements about her former employer that not only make the station look bad, but in the process, Wahl herself.

One of the accusations Wahl claims to be a consistent theme at RT-News Network is that the journalists there are forced to promote Vladimir Putin’s agenda on foreign policy; making Russia look good, and us, the United States, bad.  As I’ve pointed out earlier, I’m not ignorant of that aspect at all.  I know RT stays away from airing certain negative stories concerning Russia.  Wahl goes on to claim RT is not about reporting the truth.  Well if that’s the case, was Liz Wahl lying to everyone, including yours truly, for the past 2½ years as well?  If so, when was she being truthful, and when wasn’t she?

On that same note, Wahl says in an interview with The Daily Beast that she knew what she was getting into.  Throughout her interviews, the answer to this question varied.  I fact check the news I receive, but what about those who don’t? During her media rounds Wahl claims that the last interview she conducted, which was with retired Congressman Ron Paul, was censored claiming the network omitted the word “Russian Intervention.” Ron Paul then released a video response the next day which contradicted Wahl’s claim.  On that same note, one of the lesser seen interviews of Liz Wahl’s media rounds clearly shows Wahl using the term “Russian Invasion.” The terms “intervene” and “invade” mean two completely different things.  Finally, the most ironic, and somewhat odd, part of this story is that when Cavuto asked Wahl if she’d work for CNN, she said yes.  Well, in October of 2012, Wahl interviewed Amber Lyon, a 3 time Emmy Award winning journalist, whose very work was censored by CNN which was tied to corrupt dealings with the Bahrain regime.

There could be more out there, but this is damaging enough.  On Tuesday, I did make an attempt via Twitter to reach out to Liz Wahl in an effort to confirm she had evidence of her claims, but I received no response.

@lizwahl (my 1st question)If what you say of RT is false in your interviews, couldn't they just sue you for slander? (plz favorite for yes)

@lizwahl last question: if what you say is true, is there any real evidence you can provide, aside from feelings? (plz favorite for yes)

She mentions emails of questions the news director wanted her to ask, but refused to ask them.  The only way for Wahl to prove the interview with Paul was censored at this point would be to get access to the raw unedited interview footage.  Overall, if Wahl is never able to prove any of these claims, this may ruin her credibility as a journalist.  If she ends up on another news network anytime soon, her work will have a stigma around it.  Her accusations stating RT-News is not about truth are heavy charges, given the fact that it is a news media organization.  Essentially, I also asked Wahl via Twitter that if what she is saying about RT is false, couldn’t they just sue her?  In a nutshell, if Wahl’s statements are proven true, RT’s credibility suffers.  If Wahl’s claims are proven to be false, which at this point they appear to be, her future as a journalist will be in serious need of repair.  Traditionally, when one speaks the truth, the truth remains consistent.

Since publishing this entry on Friday 3/14/14, new information critical to the details of this story have been made available:

-On Wednesday March 19, 2014 investigative journalists Max Blumenthal and Rania Khalek published an article on the online news media site Truthdig titled…“How Cold War Hungry Neocons Stage Managed RT anchor Liz Wahl’s Resignation.”  The article goes into extensive detail that gives credence to the notion that Wahl’s resignation was not done in spontaneity and proves that she in fact did inform her an acquaintance of hers ahead of time that she would be resigning live on air from the RT-News Network.

-Finally on Friday March 21, 2014 former RT-News Anchor, now Washington, D.C. based correspondent, Elizabeth Wahl herself published her explanation of the events that both led her to RT-News in 2011, and what prompted her to depart in 2014.  Also in her firsthand account of events, Liz now admits she informed contributor for The Daily Beast, James Kirchick, of her plans to resign that day, ahead of her live on air resignation.  The entire story of Elizabeth Wahl’s firsthand account titled: “I was Putin’s Pawn” can be read on Politico Magazine.

-After reading Liz’s article in its entirety, I learned RT-News updated their website with the unedited interview of Wahl’s interview of Ron Paul.  Published on 3/7/14, it features the unedited interview that is 13 seconds longer does show that Liz asked retired congressman Ron Paul about “Russia invading.” This footage vindicates her claim of the Ron Paul interview being edited was true.  Both the edited and unedited clips are currently available on RT-News’ website.  Below this passage, I have embedded a condensed version of the 2 clips that does show the difference.