Iowa GOP-2012 Caucuses are Upon Us. UPDADTE: Final Votes are In

For the past 6-12 months, we’ve seen candidates from the GOP tirelessly claw their way

to the top of the pack, only to be pummeled back down to obscurity.  Some were bashed so badly, 2011 was the beginning and ending of their campaign for the 2012 presidency.  In the final stretch before the Iowa Caucuses take place in less than 1 hour from now, it appears that Gov. Mitt Romney and Congressman Ron Paul have ascertained some…(IMPORTANT UPDATE: 1/4/12) staying power.  The 2 have consistently polled in 1st and 2nd place for over a weeks’ time.

From the latest polling data collected from Politico 1/2/12, Santorum, Romney, and Paul are locked in a dead heat, placing Paul in 1st place.  This race can obviously blow in any direction at this juncture.   The results tonight shall be quite revealing as we observe which candidates rise, and which ones shall flounder. 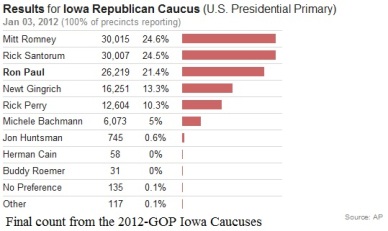 For live coverage updates, check back into the Valente Journal frequently throughout the night.  For extended real time updates, log on to Political Ticker, hosted by CNN.